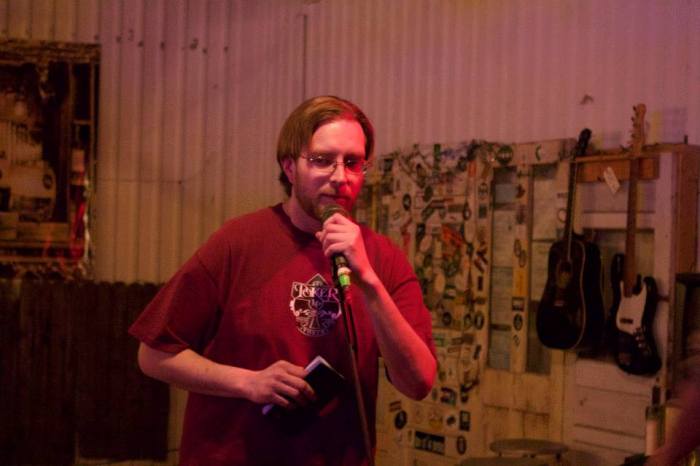 Eric Raanan Fischman is an MFA recipient from Naropa University’s Jack Kerouac School of Disembodied Poetics. Most recently, his work has appeared in Rabbit Catastrophe, Boned: Every Which Way, and The Microtext 2, and is forthcoming in an anthology from Punch Drunk Press. He has also had work in the Boulder Weekly, Bombay Gin, and Love Shovel Reviews past and present. His first book, Mordy Gets Enlightened, was published last year through The Little Door at Lunamopolis. Currently, he is collaborating with poet Jennifer Faylor on a book entitled, “Love Letters from Inanimate Objects.”

Ghazal: Orion Does Not Undo His Belt

I don’t know much about Romance, so I invite it to keep it’s clothes on.
An old dog next-door hollers at the moon who keeps her clothes on.

The night swells to a wave between the coffeepot and the couch.
The living room carpet ribbed with windowlight keeps all its clothes on.

Where is the moon’s yellow friend with his bowtie and bassoon?
A falling leaf whispers to the concrete to keep its clothes on.

Of all the galaxies in all the void, you had to metastabilize mine.
A blue marble at the end of a spiral arm keeps its feathered clothes on.

I ask Romance where the cashews are so I can crust this trout.
Hugging scales in the compost bin, the rainbows keep their clothes on.

What a luminous arrangement! The music of the clouds!
The throats of frogs addressing wings promise to keep their clothes on.

Romance brews up some lavender tea and puts on an episode of Lost.
Trembling in a dark bedroom, the mattress keeps its clothes on.

It Takes a Witness Capable of Decay